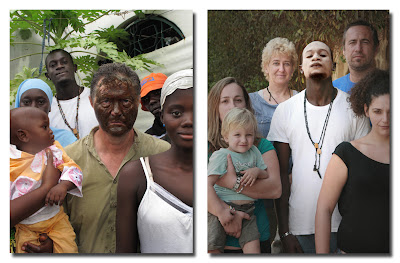 Antoni Socías is an artist who is always processing. He reinvents himself constantly, as Basilio Baltasar rightly explains in the text below these introductory lines. We could say that most artists are more interested in the conception and/or realisation process of their work than in the results, which are ultimately a consequence of this process. Having said this, not many of them achieve a state whereby we, as observers of the work, place the accent precisely on the path followed for the realisation of it. We could also say that this is one of the great functions of art, taken as an exercise and not merely a result for contemplation: educating the gaze, but also, and above all, the way in which we confront a piece, the way we confront life.
“My other self with some contradictions” is a project that explains the manner in which Antoni Socías works extremely well; in this case, the project is carried out with the collaboration of the Hispanic-Gambian artist Caramo Fanta. Actually, this work in collaboration is not an isolated case for Antoni Socías, it is not the first occasion, and will probably not be the last one in the Mallorcan artist’s career, that he has collaborated with other artists: remember, at the beginning of his career, how he did so withMiquel Barceló, both of them extremely young. Later, we find him with Enrique Irueste, with Pere Joan and, amongst those one can recover without too much effort, with Luis Pérez Mínguez or with his own son, Enric Socías. Stories of affinity,at the end of the day.
Caramo Fanta’s story is also one of affinity and mutual enrichment, beginning with a fortuitous encounter in Africa, where Antoni Socías had been approaching other ways of life with curiosity since the late ‘80s, many years before he met up with Caramo. Huge differences in the culture experienced, in the vital resources, but coincidentally Caramo spoke Catalan, had been born in Lleida and his family had decided to return to their place of origin just as he was beginning his adolescence. Common interests, too, in searching for new forms of expression: Caramo Fanta, insofar as he could, with a first-generation mobile phone, took photos and was remarkable for his skill at drawing, as one of his teachers from Lleida tells in the video projected in the exhibition; and he was also one of Lleida’s first graffiti artists, something the friends he left behind in the Catalan town remember perfectly.
Antoni Socías puts himself in the other’s shoes. Caramo Fanta becomes imbued with Socías, needs to learn and be able to develop with more and better resources. A form of collaboration begins that results in “My other self with some contradictions”, an exhibition whose title bears witness to the relationship that has arisen between the two artists.
Some older works by Antoni Socías,which are the testimony of the years that have passed since he set out on the path of Africa, are now taken up again with intensity in works proven not to be so far removed from those early experiences. We also find Antoni Socías in the act of presenting people or imposing his hand to demonstrate, very probably, this capacity and/or need man has to relate, to communicate with others. And amongst many other series, as this is an exhibition that denotes the capacity for work of both artists, we find Socías recovering the old photographs from Caramo Fanta’s mobile phone to position them as enormous images on roadside billboards, in a dual project, Dual Products.
“My other self…”,I want to be you, you want to be me. However, above and beyond an affinity and a rapport that by no means remains on the surface of things, we have the difference. Which is why, when I said that we find Antoni Socías especially in that dual series, it is because above and beyond their close collaboration, each of the artists has kept his place, fortunately. Because Caramo Fanta, painting faces white with gestures of colour, or multiplying his self-portrait nearly infinitely, maintains a plasticity one could say Antoni Socías renounced practically at the beginning of his career or which he has at the very least always left far in the background, to shine the spotlight on the concept and also on the exercise of realisation.
I remember now an image that Socías sent his friends years ago, and which is recovered for this exhibition: Cambio de personalidad (“Change of personality”)is contemplated as a totally unorthodox self-portrait that marked out this path of the interaction between cultures and races. Social interaction lends numerous, valuable resources to intercultural communication. Actually, on establishing communication between different cultures, the awareness that all construction of reality is subjective becomes even more necessary, as does the knowledge that there is no single reality, but many, and that the truth is not found in one or another of them, but in relativizing them.
I would not like to finish up this text without thanking the Agencia Española de Cooperación y Desarrollo (AECID – Spanish Agency for International Cooperation and Development) for their contribution in this catalogue, as collaboration exercises such as this one are part of their purpose. Neither would I like to forget the authors of the texts, Basilio Baltasar and Santiago Olmo, whose contributions multiply the interest of this catalogue and the comprehension of the work exhibited in it. Finally, in a very special way, I should like to thank Caramo Fanta for his enthusiasm and availability and Antoni Socías, who has contributed to this project with extraordinary eagerness, savoir-faire and personal effort.
Cristina RosSalvà
Director
EsBaluardMuseud’Art Modern i Contemporani de Palma

THE REVERSE OF THE WORLD_Basilio Baltasar

When a misunderstanding is cleared up it can give rise to a new encounter. However, there are times when misunderstandings settle in permanently, as stable forms of relationship, generating a kind of total confusion from which it is extremely difficult to extract oneself. And it is this kind of confusion that has dominated the way in which Africa is faced by Europe, ending up in the non-comprehension of what we are seeing.
Historically Africa has been constructed in European imagination as an impenetrable place, by mystery and the astonishing. The dreams of the imagination and fantasy have been projected onto the continent, but also the nightmares, turning them into colonial reality, like an extension of the thought of slavery.
Even those approximations that sought to penetrate into the mystery of “Africa” to explain the astonishment have turned into unmanageable clichés whose devastating force still blinds, placing a veil of prejudice before the eyes, silencing all the images. With the passage of time and a mineral consolidation of the clichés in the present, the poetical content (and even a certain innocence) that shows through in the testimonies of early travellers has dissolved, to materialise in the foolishness of a permanent, dramatic misapprehension.
Initially the clichés responded to the impenetrability of the mystery; they should have had the function of making the elusive comprehensible, like a first step that would then open up to a more precise, closer knowledge. But the clichés have become entrenched like catchpenny truths that supplant reality and prevent us from understanding anything that happens to us.
How is it possible to summarize a continent, when the word ‘Africa’ itself has wound up as a convention? The world has shrunk, both in its dimensions and in our minds, and our perception sees distance and proximity from different parameters, parameters that no longer correspond exactly to spatial distances. We are beginning to understand that there are no uncontaminated essences and that places are built up every day through dialogue and experiences which are not always shared, but are often parallel. So why insist on the old (essentialist) meaning of the words that denote geography, now only a kind of generic direction in space?
We can no longer speak of Africa, but of Africas. As many as there are voices capable of relating its crossbred diversity and its present. And it is precisely this that is the work of the present; renaming, resituating, reconstructing, starting out from a basis that may be more tested by shared experiences, dismantling the notion of Africa as a safari of local manners and customs, relinquishing paternalism and dissolving the original misinterpretation that weighs on us almost like a sin, but without obviating it.
It is extremely significant that in the labyrinth of prejudices and clichés, the title of Joseph Conrad’s novel, Heart of Darkness, has been understood, above all and generally speaking, as a description and a definition of the place: the Congo River that cuts across the continent, the heart of Africa. Nevertheless, as we penetrate the novel further, and as Marlow travels downriver in search of Kurtz, the “darkness”, the “heart of darkness”, takes shape as a state of mind, as an interior nightmare, as a madness that is inside men and not inherent in the geography or the landscape.
True, the novel begins in the form of a conversation on the deck of a ship anchored in the Thames, the cruising yawl Nellie. Marlow, an experienced sea captain, along with a manager and some agents from the company that hires him, tries to explain his own individual perceptions underlying colonisation. Focussing on what any individual might think and perceive, he gives the example of an officer of Julius Caesar during the campaign for Britannia, and relives what the Romans must have felt as they sailed up that same river, perceiving the mystery of an undiscovered land: “And this also,” said Marlow suddenly, “has been one of the dark places of the earth.” (…)
Land in a swamp, march through the woods, and  in some inland post feel the savagery, the utter savagery, had closed round him –all that mysterious life of the wilderness that stirs in the forest, in the jungles, in the hearts of wild men. There’s no initiation either in such mysteries. He has to live in the midst of the incomprehensible, which is also detestable. And it has a fascination, too, that goes to work upon him. The fascination of the abomination – you know. Imagine the growing regrets, the longing to escape, the powerless disgust, the surrender, the hate.” [i]